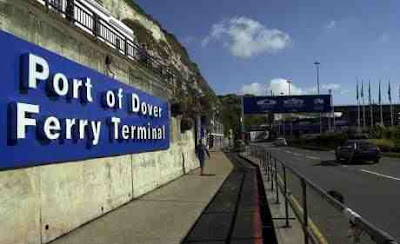 On Saturday 12th September, around 300 Nationalists and Patriots arrived at the Port of Dover to stage a march and protest to highlight the growing concerns of truck drivers coming under constant attack by foreigners over in Calais who are trying to illegally board the trailers to get to Britain. Once at Dover, the 300 or so Nationalists and Patriots were directed to Dover town centre by the police, where everyone held a meet and a greet before making their way to Russell Street to march to the Eastern Docks roundabout. Whilst on route to Russell Street some not so wise police constables started to direct everyone down an alleyway, due to a large gathering of state sponsered thugs of ANTIFA being in the vicinity. Unknowing to everyone the police actually sent them straight into an ambush, where around 50 ANTIFA blocked the alleyway and serious confrontations took place.

ANTIFA started to throw glass bottles, fireworks, flares and other assortment of missiles at the Nationalists. After about half an hour, the police finally moved the Reds into the adjacent car park where more confrontations took place, resulting in a few vehicles being damaged. Eventually the police managed to push the Reds to the top of Russell Street so that the Nationalists could form up to proceed with their lawful right to peaceful protest. The air was full of tension, the call went out by the Parade Marshall for everyone to form up into ranks of 3`s prior to the march, but due to the police trying to kettle the opposition this took longer than expected. A back up plan was agreed that if the opposition could not be moved then the Nationalist procession would about turn and proceed a few hundred yards so that they could march around the Reds. After another anxious half an hour the call was given for the lawful march to proceed, an almighty cheer echoed around the vicinity and the march started, but only for 2oo yards when the police stopped it, due to the Reds splitting up and forming different pockets of resistance along the route.

The police liaison approached the parade Marshall to agree that the thin line of police already in place at the march had to be removed so that they could join the containment of the Reds. A line of handpicked stewards were to hold the line and police the march themselves. Suddenly, the line broke and everyone broke free and headed towards the Reds, the police struggled to hold everyone back, or rather that is what the police tried to make out, instead the police just allowed both groups to confront one another, missiles including bricks, golf balls, bottles and flares filled the sky until eventually the Reds started taking casualties, 7 were hospitalised and the Nationalists and Patriots started to make their way to the Eastern Docks to begin their rally. Once at the Destination point, excellent speeches were delivered by, Richards Edmonds, Martin Corner, Paul Pitt, Dave Blue, Del Young, Daz Lumb, Billy Charlton and Kev Mack. Mark Freeman was the host for the event.

Each speaker represented their groups which included, The National Front, The South East Alliance, The Scottish Defence League, Berkshire Infidels and the Sunderland Defence League. During the speeches there was a RAF fly past to commemorate the 75th anniversary of the Battle of Britain with Spitfires and the Typhoon flying low over the rally, one Spitfire actually `tipped` its wings as it flew over the Nationalist protesters, and a loud cheer was given by everyone. After the speeches it was time for everyone to march back to the start point for well deserved refreshments at the Castle Inn public house. A group photo was taken and a few `trophies` that were wrestled from the Reds were proudly displayed and then burnt. The Conservative MP for Deal and Dover, Charlie Elphicke wrote on his Twitter account "Fascists in Dover today are not welcome and dirty our town. Well done to police for keeping them at bay" Mr Elphicke doesnt have a clue, the fascists were actually the state sponsered thugs of ANTIFA that were the ones that were not welcome to dirty the historic town of Dover. 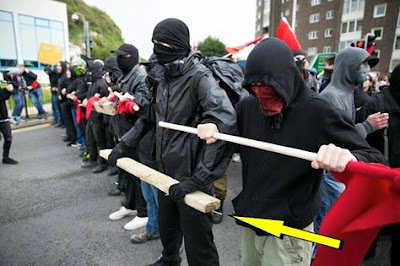 Tooled up ANTIFA,  notice nails sticking out of their planks of wood. 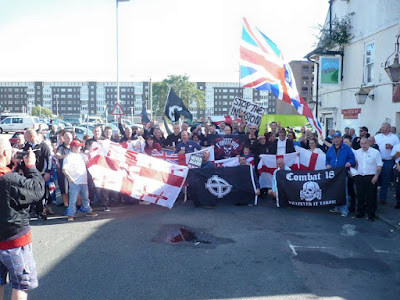 Group photo after the `Battle for Dover`. 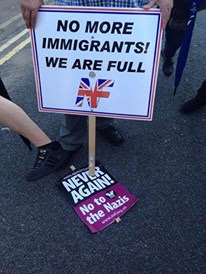 Just one of many `trophies` wrestled from the Red scum.

ANTIFA pinned in by Nationalists in Dover

ANTIFA being protected by police in Dover.

ANTIFA being protected AGAIN by police in Dover.

Full footage from the march and rally in Dover. 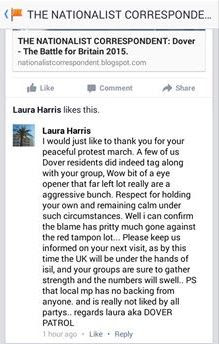 Above is a comment that was left on The Nationalist Correspondent Facebook page after the publication of this article.

Posted by Nationalist Correspondent at 08:31